We assess possible threats to homes and property on the Reservation due to shoreline erosion. Shoreline erosion occurs when water erodes the coastal bluff causing instability to the surrounding property. The threat of sea level rise and extreme weather resulting from climate change may increase the rate of shoreline erosion in the future.

The shoreline is an important tribal resource, which provides not only water access and views, but also important ecological functions. Beaches exist where erosion by tides and waves is balanced by a renewal of beach material, like sand and gravel, which in Port Gamble Bay is supplied by eroded bluff material. This type of erosion is a natural process and is necessary to maintain intertidal habitat for important species of forage fish, clams, oysters, crab and juvenile salmon.

The coastal bluff will continue to erode and retreat. The coastal bluff is eroding in response to different mechanisms, such as waves and rainfall. The rate of coastal bluff retreat is controlled by the properties of the material in the bluff and the forces acting upon them. In Port Gamble Bay, the water runoff and drainage from the uplands are the dominant forces.

The Tribe has completed many studies of its shoreline over the past decades for site-specific analysis and in response to sudden geological events.

As a part of the shoreline management and monitoring project, Environmental Program staff inspected each bluff property on the reservation to look for signs of erosion. They continue to consult with property residents and are working on a comprehensive plan to manage shoreline erosion on the reservation. 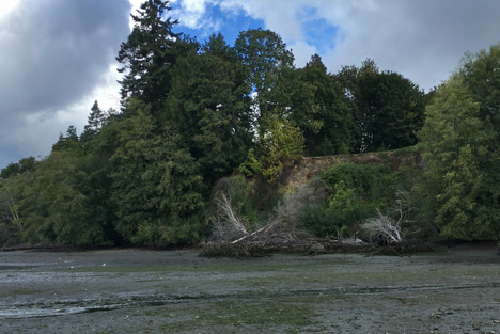 A bluff slide that occurred in 2014 added trees and bluff material to the beach. 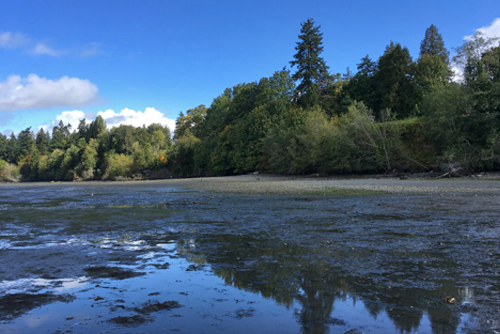 The ecological health of the Reservation shoreline is very good due to abundant riparian vegetation and normal drift cell function due to a lack of shoreline armoring. 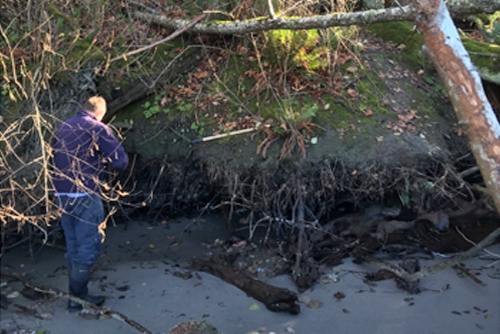 A coastal specialist inspects the toe of the bluff. The slope is undercut in part due to the creep of the hillslope downhill and the strength of the tree roots holding it up. 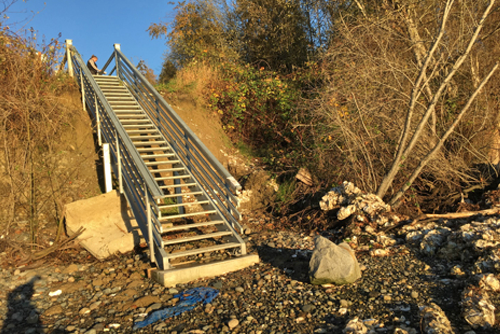 The beach stairs provide an important access to the shoreline. The stairs were replaced in 2016 because the old stairs were undercut from bluff retreat. 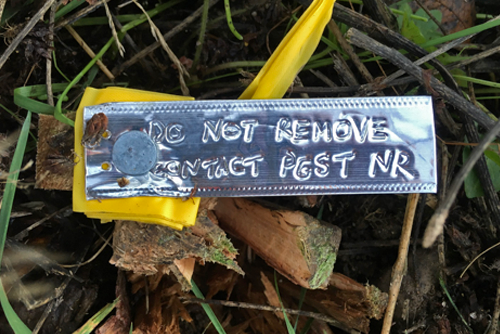 If you see one of our markers, please do not disturb! Natural resources staff placed these markers near the bluff edge to monitor erosion. 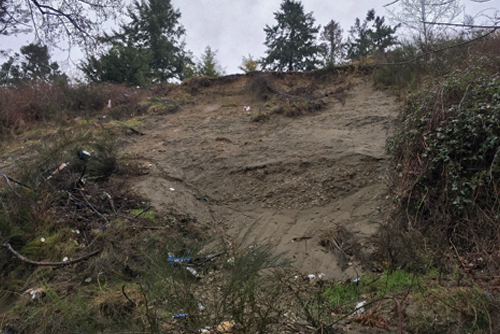 This slope is bare, even several years after the initial failure, indicating repeated sluffing of material still occurs. The slope will continue to sluff until the slope angle becomes less steep.