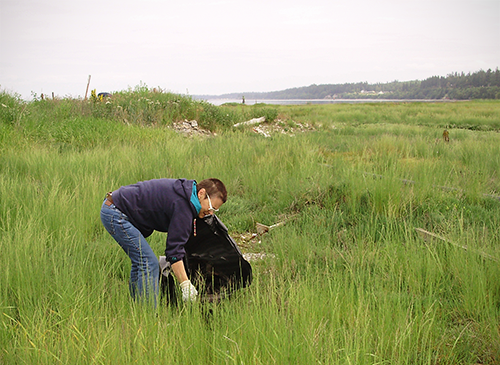 In June 2014, the Debris Removal Project—a joint effort between the Port Gamble S’Klallam Tribe and the Washington State Department of Ecology—began. The year-long restoration project focused on general debris removal from around Port Gamble Bay and the deconstruction of a derelict pier at Point Julia.

The project kicked off on June 14, 2014 with more than 50 volunteers participating in a cleanup of Point Julia’s beach and shoreline. Similar volunteer events throughout the life of the project attracted dozens of volunteers from on and off the reservation.

While general litter and refuse were the most common cleaned up, other items included washing machines, bicycles, a cast iron burning stove, bucketsful of beach glass, and several car engines. Over 300 tires—many long abandoned and covered in barnacles—and fifteen boats in varying degrees of disrepair and decay were also removed. Then there were the cars: parts, pieces, frames, and whole automobiles. One bluff served as a vehicle graveyard with several piled on top of one another.

The removal of the pier structure at Point Julia was an important project milestone. Constructed in the 1970s, the pier had become a part of the tribal community one summer and fishing excursion at a time. Unfortunately, in its later years, the pier had fallen into disrepair and its creosote pilings conflicted with the Tribe’s restoration goals for Port Gamble Bay.

Even though the Debris Removal Project ended in 2015, volunteer beach cleanups have become a regular activity at Point Julia. The Natural Resources department also proactively monitors Port Gamble Bay’s shore for derelict vessels and other items of potential concern.